Of the many foods at risk of extinction by the hands of climate change, coffee is one of the most ubiquitous—and would perhaps be the most devastating, to drinkers and producers alike. With over 2.25 billion cups consumed every day, coffee plays an outsized role culturally and has transcended the status of just a beverage. It is an energizer, a community hub, a subject of connoisseurship, and an industrial behemoth, largely produced by small-scale farmers. Roughly 120 million people globally are economically reliant on coffee. With warming temperatures and shifting agricultural zones across the world due, Stacker looked at how climate change will impact the coffee industry.

Even as climate change threatens to make much of the land where coffee is grown inhospitable, the coffee industry itself wreaks havoc on the climate. To begin with, 39 gallons of water is needed to grow just one cup’s worth of beans. Monoculture coffee farmers remain responsible for significant amounts of deforestation, particularly of the world’s rainforests, which play a vital role in stabilizing dangerous levels of CO2 and other greenhouse gasses.

As the changing climate threatens the future of coffee and vice versa, some growers and researchers turned their attention to adopting more sustainable models of growth and production. One method, called agroforestry, involves planting trees alongside coffee plants. This method creates shade and protection, a more nutrient-rich soil, and offsets the harm of deforestation that occurs when land is cleared to plant dense rows of coffee trees in full sun. But with some experts worrying measures like these are too little too late, the fate of coffee—and its millions of small-scale producers—hangs in the balance.

You may also like: Major boycotts that changed history 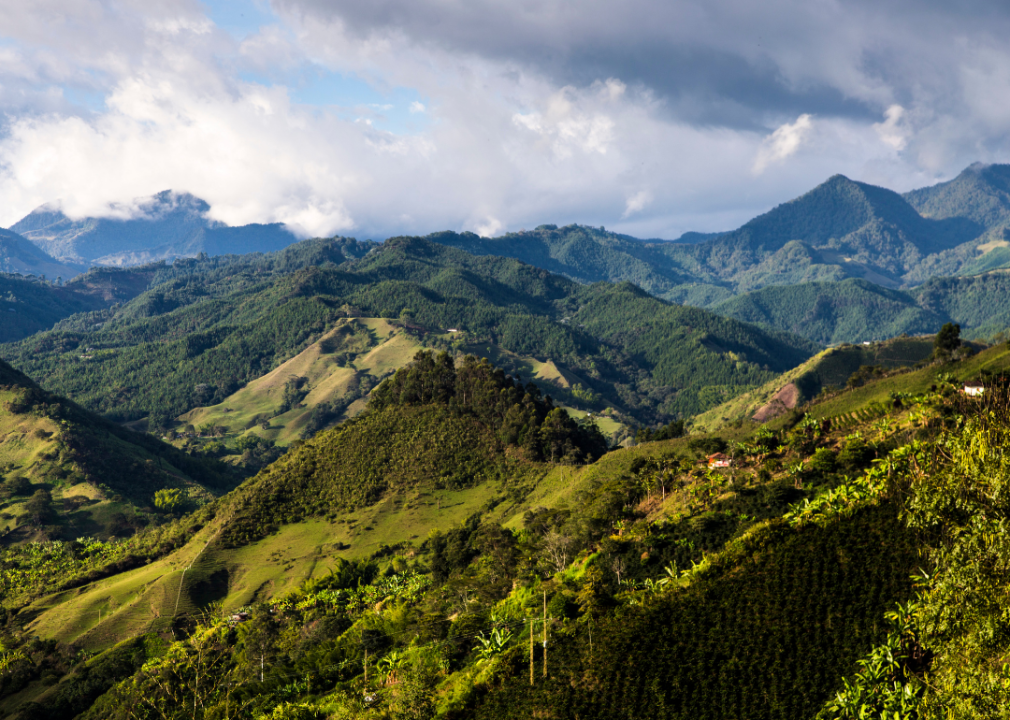 Researchers estimate by 2050, less land overall will be suitable for growing coffee

A January 2022 study predicted roughly half of the land most conducive to growing coffee will decrease over the next 30 years due to climate change. The most prevalent and beloved species of coffee, Arabica, is largely to blame for this. Arabica requires specific growing conditions found in equatorial places like Central and South America, southern Asia, and Central and West Africa. In addition, this variety is sensitive to the effects of climate change.

As the climate in the “Bean Belt” continues to warm at an alarming pace, average temperatures suited to growing coffee trees—Arabica’s ideal temperature hovers between 64 and 70 degrees Fahrenheit—will become inhospitable. Other factors impacting growth—like elevation, soil pH and texture, the length of the dry season, and rain levels—will need to be considered as farmers look for alternative growing locales. 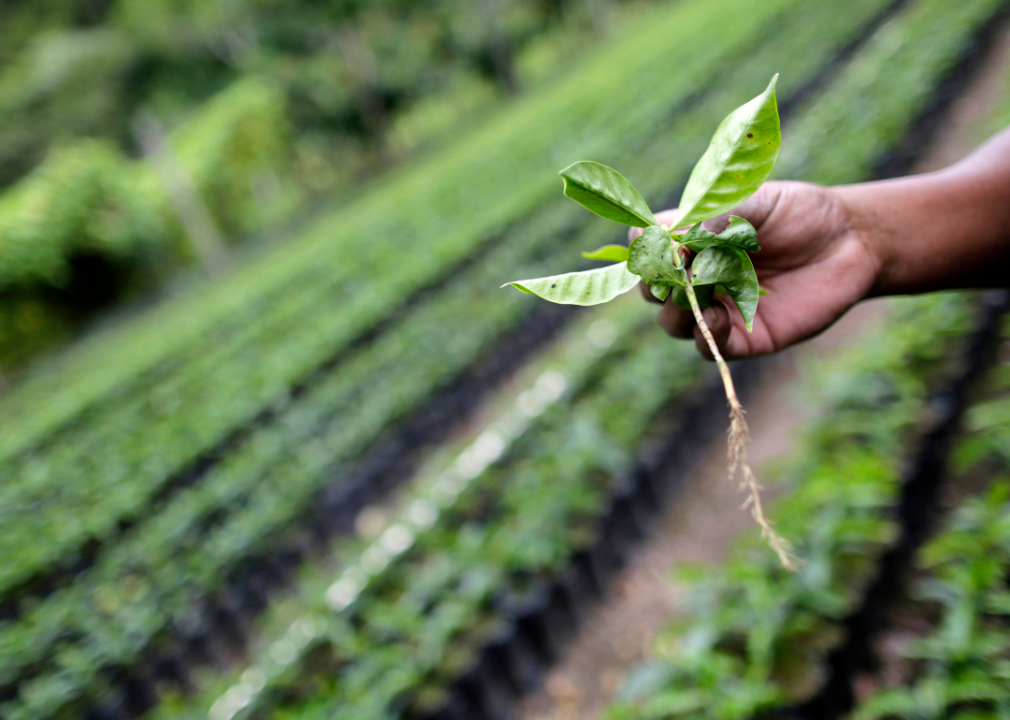 Higher temperatures in mountainous regions historically used for coffee growing may spur farmers to move higher up the mountains in search of cooler climates. Finding a new plot of land for this purpose isn’t easy. Coffee trees take three to four years to mature enough to produce berries (the seeds of which we know as coffee beans), meaning farmers could miss out on years of production if they need to find new land.

While transitioning to higher land presents a relatively short-term solution to inhospitable growing conditions, it is also inherently limited: The amount of available land shrinks the closer it is to the mountain’s peak. Inevitably, farmers will run out of space for growing, an issue that could exacerbate the already-disastrous practice of deforesting rainforests to create more usable land for coffee farms. 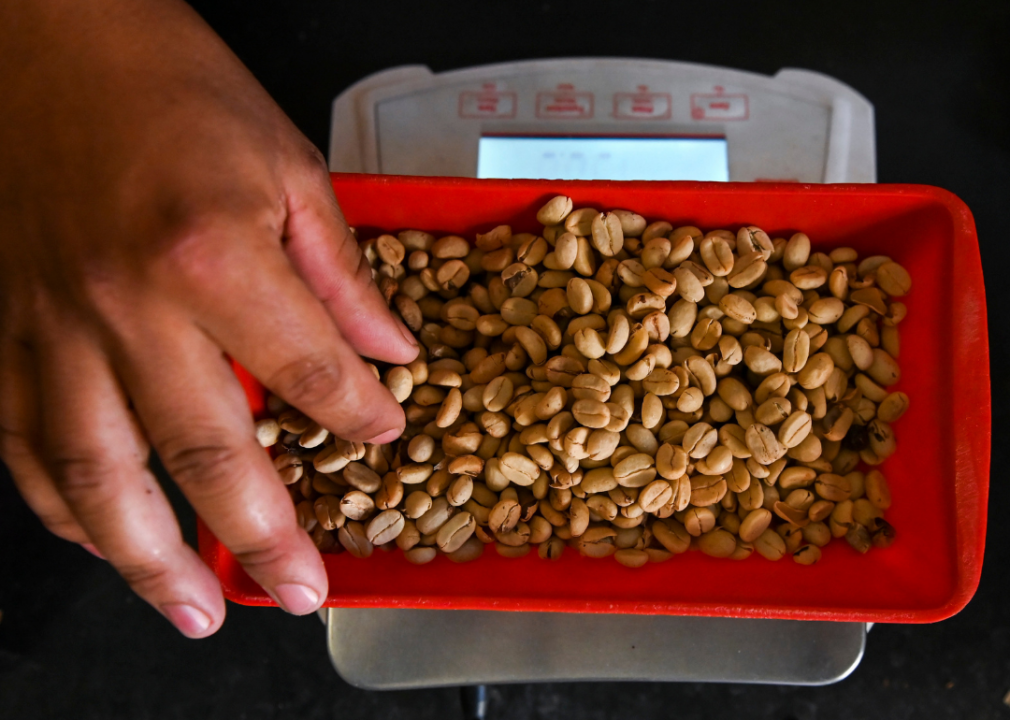 Quality of single-origin coffee may decline

Everything from the soil’s pH to how quickly sugars and acids develop in the coffee berry determines the taste and quality of coffee. Another huge impact on flavor: where the coffee is being grown. The origin of coffee can point to its quality and flavors, which accounts for why coffee connoisseurs and casual drinkers alike get excited about single-origin coffee. But most quality single-origin varieties are the fussy and less sustainable Arabica beans, known for their complex and delicious flavors and aromas. Their heartier but markedly less tasty cousin, robusta, is not as popular.

As suitable coffee-growing lands generally shrink, the areas where high-quality, single-origin coffees are produced disappear as well. These coffees, in particular, rely so heavily on the specificity of their growing location and unique set of conditions. The impact of Arabica beans becoming harder to grow can already be felt, as rising temperatures, pests, and diseases exacerbated by climate change diminish their quality or kill trees outright. Its price rose 43% in 2021 alone. 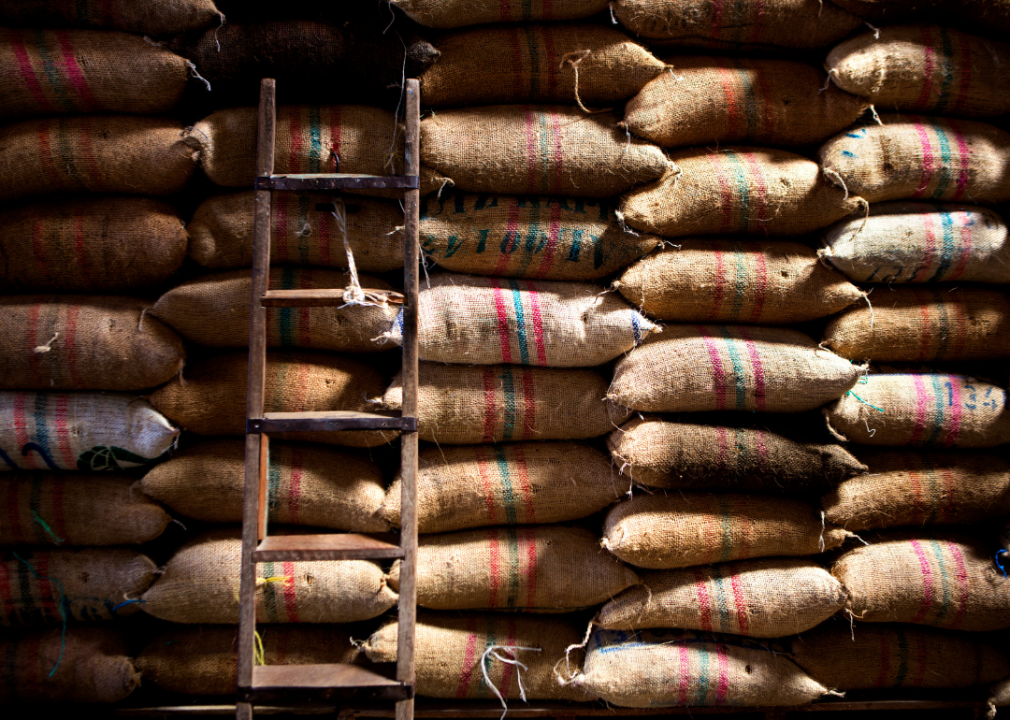 Extreme and unpredictable weather has pushed historically predictable growing seasons and dry seasons into chaos. In 2021, Brazil saw frosts in July, and its dry season is projected to begin earlier than usual in 2022, resulting in Arabica yields 40% lower than the previous year. This loss amounts to roughly two-thirds of American coffee consumption and has led to skyrocketing prices for Arabica beans as supply dwindles and demand continues to climb.

The shortage led many Brazilian roasters to switch to robusta beans to fill the gap. Robusta, unlike Arabica, has a more bitter flavor and is overall a less desirable bean. The correct balance of growing conditions is necessary not only for coffee trees to grow and thrive but also for their beans to have the flavors and smells many coffee drinkers love. A 2021 study examined how changing climates will alter coffee flavor, and researchers found factors like altitude and light exposure impact coffee’s quality. While growing coffee trees at higher altitudes seems to improve the coffee’s taste and aroma, increased light exposure—a hallmark of monoculture farms, where coffee trees are planted in densely packed rows in full sun—decreases the quality and caffeine content of coffee.

While looking for innovative ways to grow coffee, farmers and scientists learned returning to older coffee farming practices may yield the most positive results. One such method, agroforestry, couples coffee trees with forested environments in order to lend the coffee trees shade and protection. Sometimes referred to as regenerative farming, coffee grown with this method had more desirable levels of pH and potassium, two factors rising global temperatures threaten. Offering a promising solution to inhospitable growing conditions for coffee, agroforestry could preserve the quality of the coffee by reducing light exposure and introducing a diverse, nutrient-rich environment.

You may also like: 30 of the biggest scams in modern history 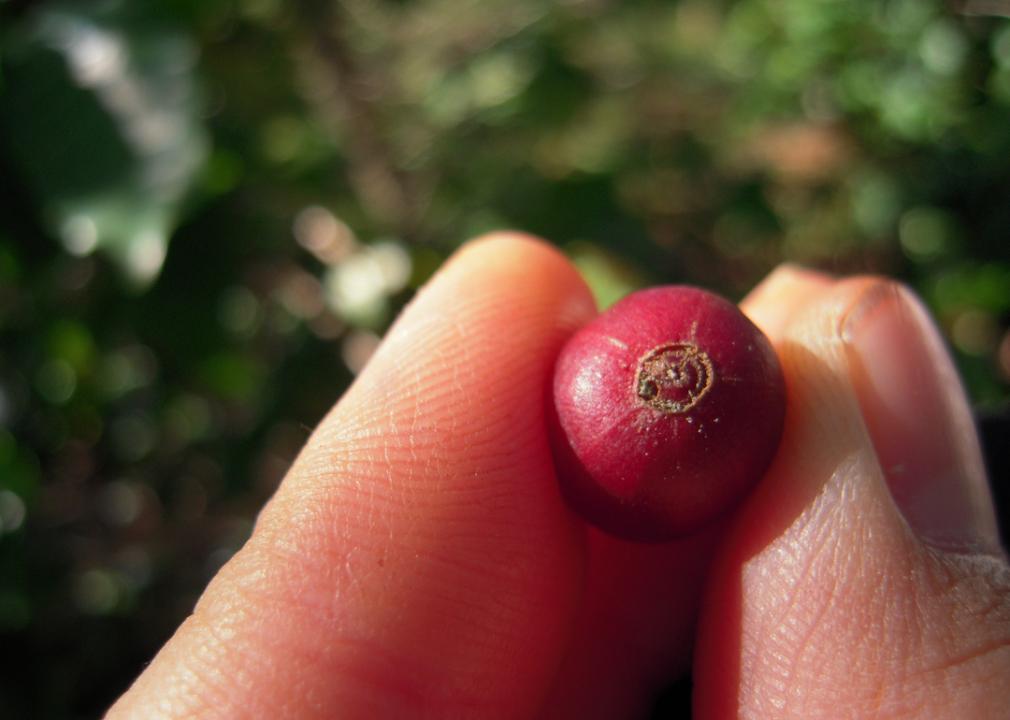 The spread of the coffee berry borer is expanding

Another climate change-driven threat to coffee comes in the form of the coffee berry borer, an insect that causes the coffee industry an estimated $500 million in annual damages. Indigenous to Africa, the pest spread to other coffee-producing areas of the world in the 16th and 17th centuries. The first coffee berry borers were identified in Hawaii in 2010. Today, they are present in all coffee-growing regions, apart from Papua New Guinea and Nepal.

The coffee berry borer feeds on the coffee berry and lays its eggs inside it, damaging the quality of the beans, reducing yields, and weakening the plant to other threats. This can have particularly devastating effects on smallholder coffee farmers, who can see entire swathes of their crops decimated by the borer. The pest has only become more pervasive as global temperatures rise. 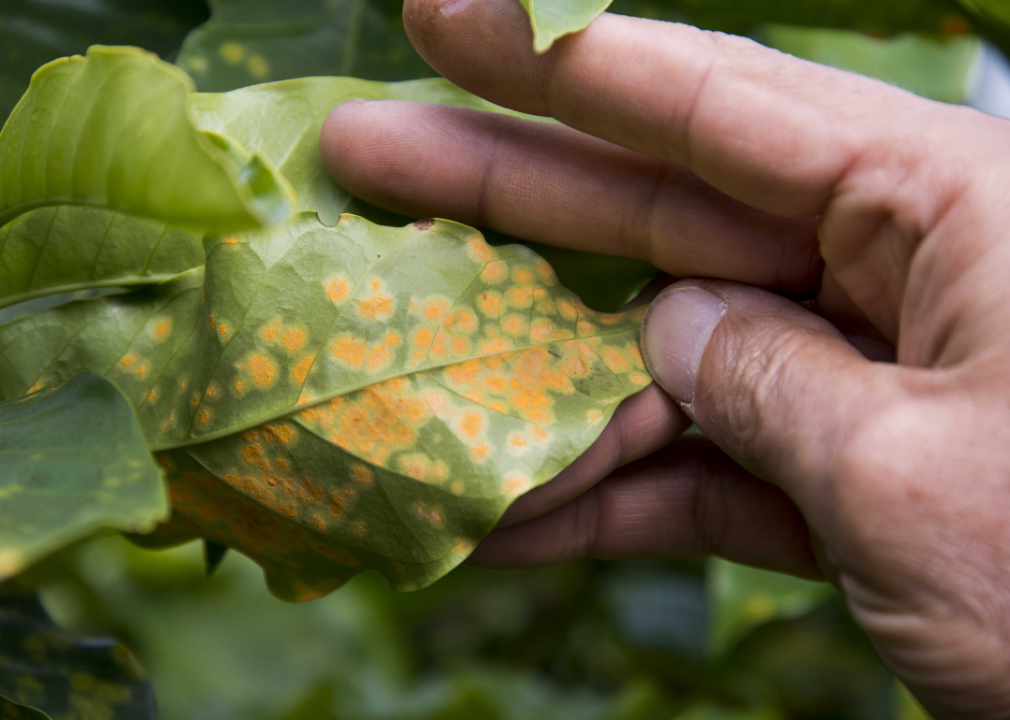 A deadly coffee tree fungus, coffee leaf rust has wreaked havoc on the coffee industry since it completely annihilated the bustling coffee enterprise in Sri Lanka (then Ceylon) over the course of just 20 years in the late 1800s. Rust works by infecting the leaves of coffee trees, sometimes within only hours of the spores alighting on the leaves’ surfaces. The orange-colored dust coats the leaf, penetrates inside, and then kills it, causing the leaves to fall off the tree. This makes it impossible for the tree to supply the nutrients essential for blooming and setting its coffee berries.

Climate change-fueled conditions like rising temperatures, high humidity, and high winds, allow the fungus to reproduce and spread more quickly. Even the COVID-19 pandemic is making matters worse in terms of coffee leaf rust: Labor shortages on farms, closed borders, and a scarcity of resources are factors that have historically been linked to rust outbreaks. 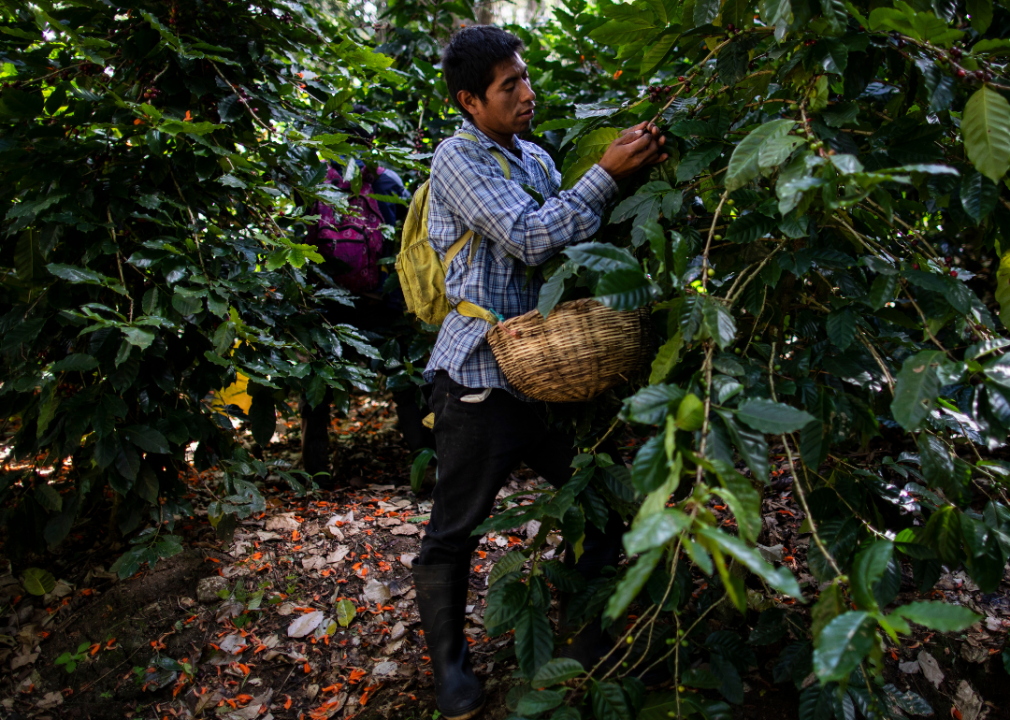 Hurricanes, floods, and droughts, among other natural disasters, have gotten markedly worse over the years, and they will continue to get more severe. In 2020, Hurricanes Eta and Iota pommeled Honduras, Nicaragua, Panama, El Salvador, and Guatemala (among other nations), displacing hundreds of thousands of people and killing over 200. Additionally, more than 25,000 acres of coffee farmland were damaged or destroyed.

Back in 2016, parts of Brazil, the world’s largest producer of coffee, experienced serious droughts that wiped out many smallholder farms’ coffee crops. This has caused many generations-old coffee farms to shutter—or to switch to other crops which require less water—in order to stay afloat. 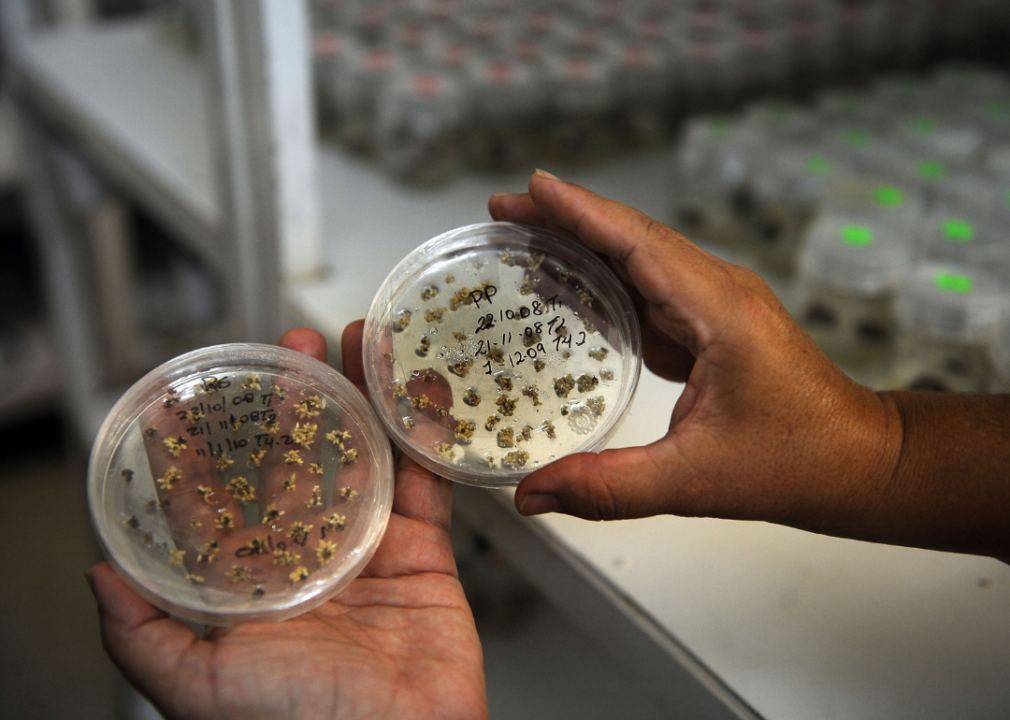 In an effort to make coffee plants more resistant to extreme environmental circumstances—while preserving flavor and other desirable qualities—several organizations have been conducting research on hybrid coffee varieties. The goal is to adapt Arabica coffee, the more tasty but less sustainable variety, to become heartier.

The European Union is currently funding a project called BREEDCAFS to develop adaptive hybrid varieties, which, when used in combination with agroforestry conditions, could have a chance at withstanding endangerment from climate change. Coupling shade management with shade-tolerant hybrid varieties could offer a solution to rising temperatures and sun exposure, while also producing beans with rich aromas and well-developed acidic flavors. 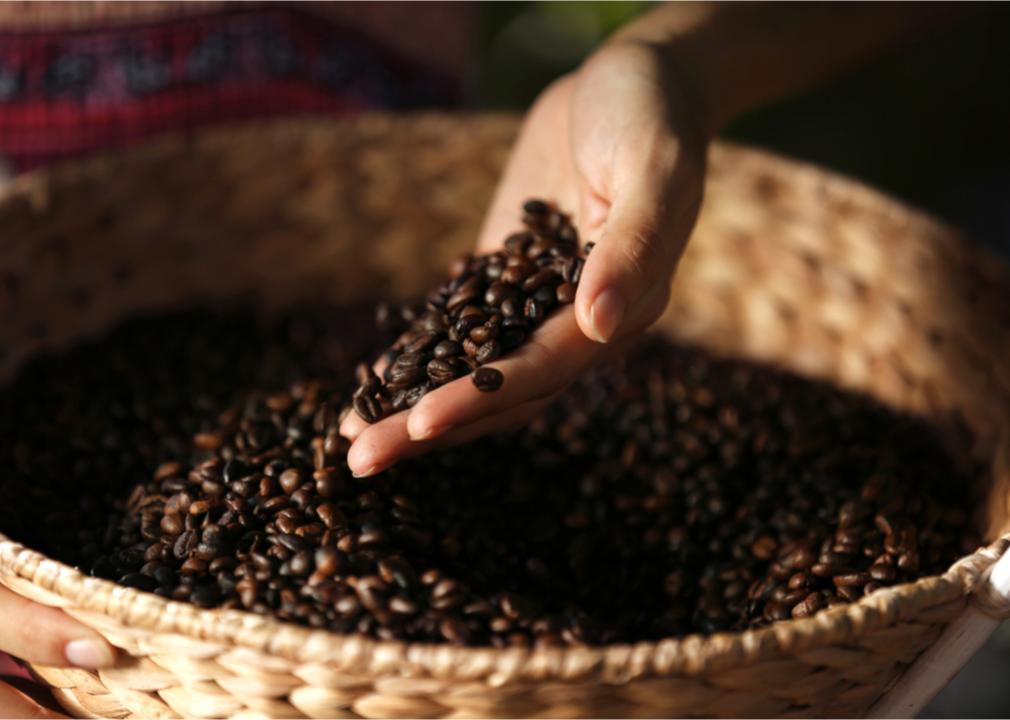 Wild coffee species may also be a boon to the industry

Despite that the coffee industry is dominated by just two bean varieties, there are over 100 types of wild coffee species growing naturally in forests. While many don’t taste anything like the Arabica brews people know and love, there are a couple of candidates that already contain the qualities scientists are so keen on developing: delicious flavor and climate resilience.

One bean, in particular, coffea stenophylla, passed the taste test of professional coffee judges and can tolerate average temperatures 11-12 degrees Fahrenheit higher than arabica trees. Though this variety was thought to be extinct, researchers came across it in 2018 in tropical forests in Sierra Leone. Now, coffee producers have begun planting seedlings to test whether stenophylla could succeed Arabica as the future of coffee.

You may also like: Can you guess the company these real ‘Jeopardy!’ questions are about?